Video Copilot JETSTRIKE Overview
The Video Copilot JetStrike 3D HD Models (Electronic Download) is a collection of 3D military and commercial aircraft
models for customizable use in After Effects and other 3D programs. For After Effects, JetStrike requires Video Copilot's
Element 3D After Effects plug-in, sold separately, as it functions within the plug-in. Outside of After Effects, JetStrike can
be used in any 3D program that supports any of the following 3D formats: OBJ Quads, C4D (R12+), FBX Quads, 3ds Max,
3ds+ Max (Vray 1.5+). Compatible programs include Cinema 4D, 3D Studio Max, Maya, and Blender.
JetStrike includes 10+ highly detailed, high-resolution models, multiple 4K texture skins, and a large selection of decals.
The 4K skins cover both the exterior and interior of the planes. In After Effects, you can animate complex formations
and movements, create epic establishing shots, and launch rockets. You'll have access to the movement of the landing
gear, turbines, propellers, exhaust intake nozzles, flaps, slats, elevators, rudders, ailerons, weapons bays, and more.
In a feature called "Mesh Visibility," you'll be able to hide and solo any part of a plane. Using this feature, you can, for
example, make the plane skin see-through to show how a missile is lining up for launch.
JetStrike is compatible with both Macs and PCs and is supported by After Effects CS4 and higher. In order to license
properly with Element 3D, JetStrike must be purchased using the same account used to purchase Element 3D. 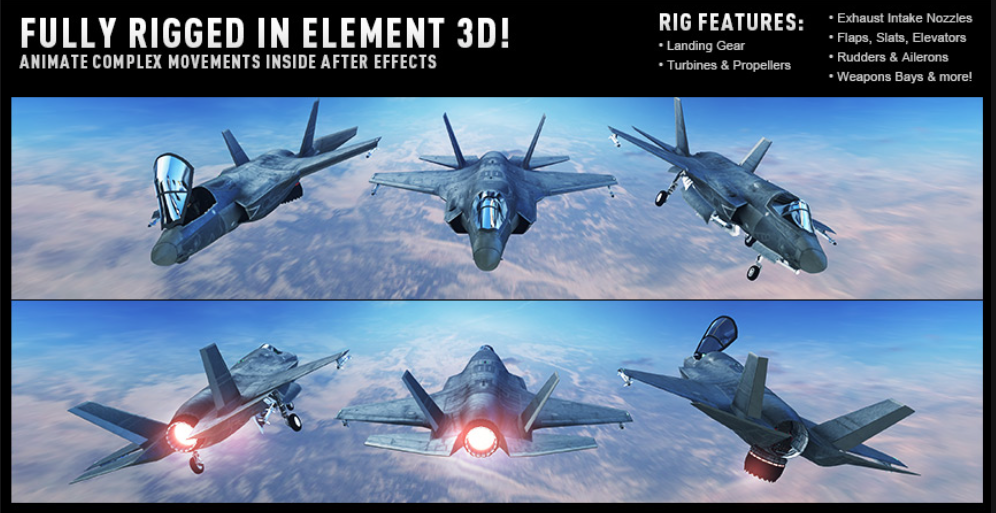